“Oh, no, it wasn’t the airplanes…it was Beauty killed the Beast.” 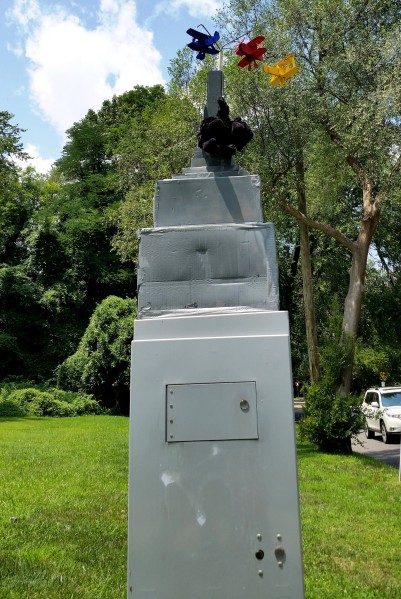 The relatively new street art at the corner of Fessenden Street and Reno Road is admittedly a bit outside the bounds of Tenleytown, but as many neighbors probably pass through this intersection daily, we thought you might enjoy knowing a bit more about the great ape that has taken up residence there.

The transformation of the traffic control box is the brain child of Theodore Carter, a writer who lives with his family in Takoma Park, MD. The art is a family affair, with Carter’s two kids assisting in the construction of the Empire State Building and planes that now adorn the top of the box, along with a plush gorilla. All it’s missing is Fay Wray.

Don’t worry – this is not some adorable act of vandalism. The entire piece lifts off the box without damaging or altering it in any way.

Here’s a video produced by Carter of the process:

This is the second year that Carter has used the traffic box as a medium. Last summer he and his son created a 1950s-style sci-fi robot.

“I pass the box on the corner of Fessenden and Reno frequently on my commute and it is particularly offensive to me because of its location near an open field,” says Carter. “My hope is to change the way people look at that intersection even after the sculpture is gone. I want people to have a memory of that moment of absurdity. Hopefully this will change that space for them in a permanent way.”

Carter would like to see more traffic boxes turned into art, and has proposed an initiative to the D.C. Commission on the Arts and Humanities. The commission hasn’t seized upon the idea yet, so perhaps a guerrilla (pardon the pun) campaign is in order.

Carter’s idea brings to mind the work of the Knitorious M.E.G. who regularly yarn bombs the city of Richmond, VA. This year she’s focusing on “Love Bombs.” Yarn bombing is not as violent as it sounds – it’s just covering public objects with knitted yarn.

As for Carter? He may have a few other public art ideas up his sleeve. “I’ve got other projects in mind, but I like to keep things under wraps,” he says. “The surprise is the fun part.”

What do you think, Tenleytowners, is whimsical public art like this a good idea? Share your thoughts in the comments section.