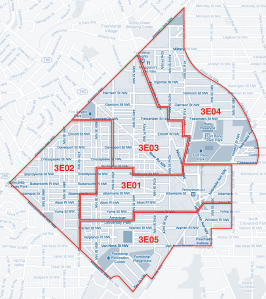 When most District residents think about this November’s election, they think about who the next mayor will be or the race for Washington’s first elected Attorney General. Those and other citywide races are important for the direction our city will take in the next four years. Voters should learn more about the candidates and consider carefully for whom they will vote.

However, here at Tenleytown, D.C. we are also looking a bit closer to home as the five seats on our Advisory Neighborhood Commission (ANC), which represents AU Park, Friendship Heights, and Tenleytown, are up for grabs this fall. ANCs have the closest ties to local communities and are elected to represent directly neighborhood interests.

ANC 3E commissioners have played significant roles in shaping the development of the Wisconsin Avenue corridor; representing local interests in the expansion, renovation, and boundaries of Janney, Alice Deal, and Woodrow Wilson schools; addressing issues of livability, walkability, and transportation; managing relationships between businesses and residents; and responding to District government and agencies’ policy proposals that impact the area in which we live.

Whether one agrees with the positions they have taken or not, ANC 3E commissioners have been very influential in our community. So it’s no surprise that this year’s election is shaping up to be a competitive one, as 10 candidates compete for seats in five single member districts (SMD). Each SMD consists of approximately 2,000 residents.

By comparison, neighboring ANC 3F (Van Ness, Forest Hills, North Cleveland Park) has only one competitive race, and for two of the commission’s seven seats no candidates are running. Similarly, our other neighbor ANC 3D (Palisades, Spring Valley, Wesley Heights, AU) has only two competitive races out of 10, and one seat for which there are no candidates.

Although the election is still over two months away, the campaign for ANC 3E is already heating up as candidates have filed four challenges with the DC Board of Elections and Ethics to opponents’ nominating petitions. Three of those challenges were related to the race for the ANC 3E-05 seat. Only 19 challenges in total were filed in the more than 200 races in SMDs across the city.

Challenges can be filed by any citizen who does not believe that a candidate has met the requirements for obtaining signatures for his or her nominating petition to be placed on the ballot. By law, ANC candidates must obtain “25 signatures of duly registered voters who reside in the same Single-Member District as the candidate.” The DCBoEE will review the contested petitions and rule on the challenges by September 8; candidates can appeal the decision until September 11.

With three current commissioners not running for reelection, ANC 3E is guaranteed to have a majority of new faces in its next term. Over the next few weeks, Tenleytown, D.C. will feature profiles of the candidates vying for seats in each of the five SMDs that make up ANC 3E to help residents learn a bit more about who might be representing them at the neighborhood level.

Keep an eye out for coverage of ANC 3E and commission candidates in the All Politics is Local section of our website, or subscribe to Tenleytown, D.C. on the homepage to make sure you receive coverage right in your inbox.