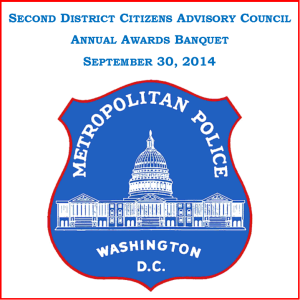 The Citizens Advisory Council for the Metropolitan Police Department’s Second District will hold its annual awards banquet on September 30, 2014 to honor police officers and citizens in the community who have done an outstanding job combating crime or helping with the overall public safety mission in the Second District.

Nearly 400 police officers serve the Second District and its more than 138,000 residents, encompassing most of northwest Washington, DC, from Chevy Chase to Foggy Bottom and Spring Valley across to Dupont Circle. Earlier this year, the Second District received the award for Best Performing District of the Year at the citywide MPD awards ceremony.

The Citizens Advisory Council awards banquet is an opportunity for our community to thank these brave men and women for their service. Over 100 attendees, including District government representatives, community leaders, and members of the police department attend annually. WJLA reporter Sam Ford will emcee the event this year, which will specifically recognize almost 20 standout leaders in the MPD Second District.

And you can be there to show your appreciation – and have a little fun, too. The awards ceremony will take place on Tuesday, September 30 from 6:30 p.m. until 10:00 p.m. at Maggiano’s Little Italy in Friendship Heights. Tickets for the event are available for purchase online, and include a four-course meal, along with beer, wine, or soft drinks.

The Citizens Advisory Council is an advisory panel in the Second District that provides the district commander with information and recommendations from the community on the public’s safety problems and police service needs. In addition to recognizing and giving thanks for the outstanding service of Second District police officers, proceeds from the banquet help support community programs like National Night Out, the Second District Halloween haunted house, and holiday sponsorship of children in need.

Don’t wait – purchase your tickets for the awards banquet today! Visit http://bit.ly/Wnxb2I for tickets and additional information about the event.