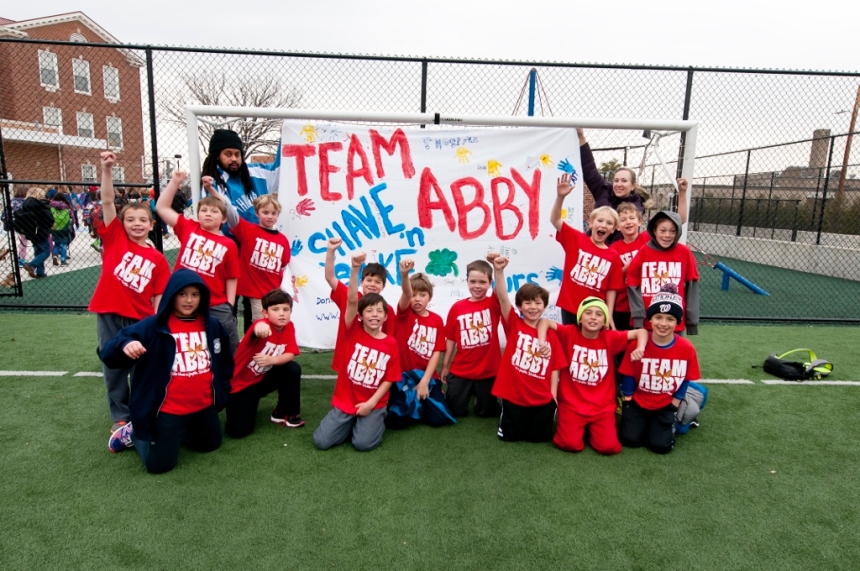 Sometimes the greatest heroes do not have super powers or don masks and capes. Sometimes they hide under shy grins and wear sneakers. Janney Elementary School students who have banded together in support of a former classmate battling cancer are outshining any Superman or Wonder Woman.

Appearing live on Good Day DC this morning, three young men shaved their heads in solidarity with Abby Furco, an 8-year-old girl fighting to beat an aggressive form of childhood cancer. When asked why he was shaving his head, one boy told the anchor, “It’s not fair that [Abby] has to lose her hair over a sickness.” Another simply said, “Abby is one of my friends.” Their appearance sought to raise awareness of childhood cancer and help support a cure.

The head shaving, however, is just a small part of the tremendous effort being made by Team Abby and the Janney community, which has raised more than $11,000 to date for the St. Baldrick’s Foundation. St. Baldrick’s funds research into treatments and cures for childhood cancer.

Abby, who attended Janney for two years when her family was stationed in Washington, DC, was diagnosed with Ph+ acute lymphoblastic leukemia at the age of four. At the time of her diagnosis she was given just a 20 percent chance of survival. Abby’s family attributes a relatively new drug dasatinib – and the work of the St. Baldrick’s Foundation – with saving their little girl’s life. St. Baldrick’s funded a research study on the effects of dasatinib on children, which eventually led to the drug being available for Abby’s treatment. Abby went into clinical remission following the inclusion of the medication in her chemotherapy regime.

Sadly, Abby’s cancer relapsed in September of last year, and just two months ago she underwent a bone marrow transplant in Chicago where her family now lives. Her relapse makes the efforts of Team Abby all the more poignant.

“Abby is still in the hospital fighting many different battles that come with the territory,” wrote Patty Furco, Abby’s mother, in an email. “These boys and Janney families supporting them, are just amazing and truly lifting us up during tough times.”

According to the St. Baldrick’s Foundation, more than 175,000 kids are diagnosed each year with cancer. Fundraising and awareness campaigns led by groups like Team Abby have helped the foundation fund more than $150 million in research grants to find cures.

Team Abby is hoping to add to that total through a Shave ‘n Bake sale taking place Thursday and Friday afternoon at 3:15 p.m. at Janney Elementary School. Proceeds from the sale will go to the St. Baldrick’s Foundation.

The Janney kids will also take part in a Salute to Our Littlest Heroes head-shaving event on Saturday, March 28 at Flanagan’s Harp & Fiddle in Bethesda from 11:00 a.m. to 4:00 p.m. Twelve more boys will shave their heads in solidarity with Abby at 11:30 a.m. – and you can join them. Those interested in participating in the head-shaving, volunteering at the event, or making a donation can visit the event page for additional information.