Veteran member of the Metropolitan Police Department Melvin Gresham was promoted to Commander of the Second Police District on Monday. He most recently served as a captain in the Second District, and as an acting commander following the retirement of Second District Commander Michael Reese on March 7, 2015.

“I am both honored and excited about my new assignment as the district commander. I will continue my commitment in providing not only the most professional service to the community, but also in making our community a safer neighborhood,” Commander Gresham wrote in an email to members of the Second District. 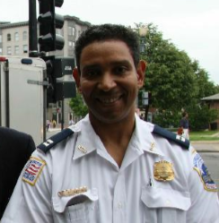 According to his MPD bio, during his career Gresham has also served in the 3rd, 4th, 5th, and 7th Districts, the Narcotics Branch, and the Special Operations Division.