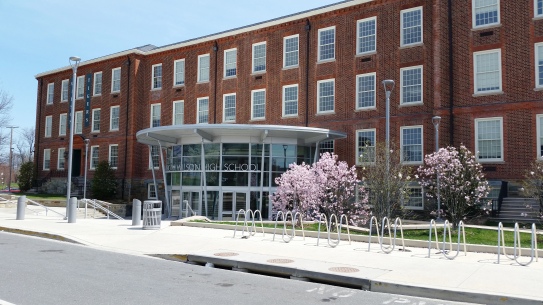 Woodrow Wilson High School is an important part of the fabric of Tenleytown, critical to the families in the schools feeding it, critical to the broader neighborhood, and critical to the city as a whole. Wilson succeeds with a diverse population that closely reflects the city, and is in turn a wonderful reflection of and on the city.

In the proposed school budgets for next year, Wilson faces a significant 10.5% reduction in its per-pupil allotment.

Many in the Wilson community are asking that half of this cut be restored.

For those who do not live it year-to-year, the school budgeting process is fraught with mystery. In thinking about the Wilson cut, it is helpful to review how the D.C. Public Schools budgets are derived. For a full description, see the DCFPI Primer.

First, DCPS receives funding from the city through the Uniform Per Student Funding Formula, which assigns a foundation amount to every public school child, supplemented by specific dollar amounts for children with specific characteristics. (See Frame 358.) These funds cover both central office and local school functions. DCPS also receives Title I and Title II federal funds, a portion of which are allocated to individual schools.

Second, as outlined in its Budget Guide, DCPS allocates funds to schools using staffing formulas, assigning positions and funding for them based on the number and needs of the children in a school. DCPS deviates from the pure staffing model approach in some instances, including specialty, stabilization and per-pupil minimum funds.

Last year, the D.C. Council added an “at-risk” weight to the funding formula, and the dollars for at-risk students were supposed to follow the student. Because the weight was added late in the process, DCPS was not in a position to immediately formulate a new menu of programs for at-risk students. Funding was distributed to address existing priorities, many of which served at-risk students.

With more time in advance of this school year, DCPS was able to have at-risk dollars tied to students, which led to a redistribution of funds. That change, however, should not have adversely affected the Wilson budget because the school was underfunded for at-risk students last year. Wilson received approximately $1,100 per at-risk student in 2014-2015, when if properly allocated Wilson should have received closer to $2,100 per at-risk student.

So what happened to Wilson’s budget?

In previous years, Wilson received funds to meet a per-pupil minimum – $9,276 for the 2014-2015 school year. This year the city revisited the per-pupil minimum and reduced it to closer to $9,000 for most of the schools to which it applied, and eliminated it entirely for Wilson.

While it may make sense for the city to reconsider the structure of the per-pupil minimum, DCPS should not abruptly eliminate it for just one school.

In the Fair Student Funding Bill, the D.C. Council mandated that no school lose more than 5% of its overall budget in a single year due to an enrollment decline. (See here Section 4, subsection c creating a new Section 108a.) The idea was to create stability.

A similar principle could and should apply to schools gaining enrollment. Those schools should not lose more than 5% of their per-pupil funding. Wilson is slated to gain 170 students and lose $309,600, resulting in a 10.5% cut in spending per pupil. If a 5% reduction cap applied, Wilson would receive $8,812 per pupil – the same funding level as the second lowest funded school, on an overall per-pupil basis, Alice Deal Middle School.

The Wilson community does not want to see any school’s budget reduced, nor does it aspire to have more overall per-pupil funding than any other comprehensive school. However, DCPS should find other dollars to make its budget whole.

Please help send that message to DCPS by adding your name to this petition.

The cut is fixable and should be fixed.

For more information about the proposed cuts, please read the letters from the Ward 3 -Wilson Feeder Education Network and Councilmember Mary Cheh to Chancellor Henderson and an editorial in the April 8, 2015 edition of the Northwest Current.

Matthew Frumin is a former ANC 3E commissioner, served on the Deputy Mayor for Education’s Student Assignment Committee, and has been a parent leader at Wilson.